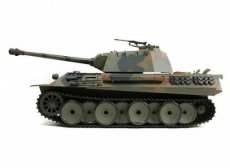 The German Panzer V, more commonly known as the Panther, first saw action in World War 2 in July 1943 during the Kursk Campaign on the eastern front. Rushed into combat to counter the the Russian T-34, it was not quite ready and did not perform as well as expected. However later improvements solved the issues and from that point on, the Panther was one of the most potent and feared tanks of the second world war.
Serving in every major european theatre, its excellent combination of firepower, mobility and protection became the benchmark for post-world war two tank design and it is still regarded as one of the finest armoured fighting vehicles ever made.
This amazing 1/16 scale radio control version delivers improved scale appearance and functionality including a new colour scheme with painted Drive and Sprocket wheels and a new scale driver.
The tank's turret rotates 358 degrees and the barrel elevates 60 degrees. The track wheels run on an independent suspension system just as the real Panther did and this makes traversing difficult terrain very easy. Add to that an Airsoft firing main gun and you have the making of some great model tank battles!
Finished in authentic colours the Panther also has plenty of scale parts to fit to the model such as track tools, machine guns and a highly detailed tank commander in authentic German armoured division uniform. There are also spare track links, a decal sheet and comprehensive instructions.
This is a fantastic scale RC version of a great WW2 tank and given its finish and features it is truly astounding value for money.
Specs
Firing Mechanism: Electric Airsoft
BB Size: 6mm
BB Capacity: 35
Weight: 3200g
Speed: Scale 70kmh
Length: 520mm
Width: 240mm
Height: 200mm